In a formulaic continuation of spending entire episodes delving into a specific agent’s irrelevant backstory, Maxine (“Max”), aka “Boxer” is up next, and by extension, her partner Yuri, aka “Robot.” On one hand, a platitude-drenched, cliche-driven slog of a twenty minutes. On the other hand… biker lesbians.

It’s time for Maxine, the badass boxing blonde-undercut biker babe with the android girlfriend. After much anticipation for a Max-centric episode, we finally get to see what makes her tick, and in the process, watch her punch assholes for justice, smash the patriarchy, and seize victory in a blaze of action-packed glory. This is gonna be sick.

Just kidding. Max’s long-awaited backstory is that she had a bad time at her high school prom. Right off the bat, the episode opens with a sobbing, conservatively-dressed Max chopping off her hair. Sigh.

SEVEN-O gets tapped to investigate a string of violent crimes targeting students at a local high school, though the student body is more concerned about the upcoming prom. The popular cheerleader girls are catty. The less popular girls shriek of the social injustice that prom represents, with all that rampant “looksism” (discrimination against ugly people) that goes on. A popular jock plays it cool until he becomes a suspect, but the real perp is one of the popular girls, who uses Anthem to morph literally into a queen bee (say it with me: ughhh.) Led by the efforts of Max, SEVEN-O intercepts, talks her down, and takes her down. The end.

Double Decker obviously takes its cues from Western media, and has proclaimed its self-awareness in embracing (and subsequently subverting) action/noir cliches. In its defense, the literary chemical burn of American high school tropes may sting just a little less in Japan. But rather than subverting or parodying, Double Decker! plays it straight – if you will – and unloads probably the dullest and most straight-forward episode yet.

But this Symposium can’t conclude until we chat about the one thing episode 8 had to offer in compensation for its drab premise and underutilizing its heroine.

Max’s backstory has none of the grit and explosions for which one might have hoped. But Double Decker! does want to use her as a conduit to advance its keen interest in LGBT recognition. 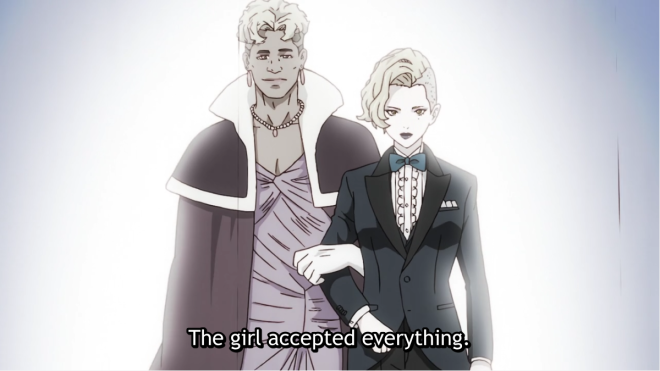 We are initially led to believe that Max hates the prom because she didn’t get asked to the dance by a boy she liked, but it turns out, that wasn’t how it played out at all. In fact, her classmate did ask, but also revealed a deep secret: the classmate in question wanted to dress as a woman (presumably, the character is trans). In support of her friend, Max herself attends the dance presenting in masculine-coded fashion. The pair put on their brave faces, but when arriving at prom, they are bullied and jeered until they leave. Max’s friend falls to drug addiction and eventually disappears completely.

Within the arena of Japanese anime, the effort rings with determination and good intentions. Max and her partner being bullied for gender nonconformity and transgenderism is framed as not only negative, the traumatic experience is presented as the foundation for Max’s motivations as a character.

But the Japanese anime arena has somewhat of a low ceiling, and some viewers might decry a clumsy attempt at representation that results in a trans character disappearing into drug addiction and being reduced to sob-story fodder for a non-trans character. And after Kirill’s sister’s biological sex being a bit of a punchline, skepticism was already pretty high. Nor is the tale of Max’s prom date resolved, as Max relives her bitter high school experience not through another trans or gender non-conforming student, but a girl who developed an eating disorder to lose weight and become popular.

However, the episode ends with an optimistic nod toward gender nonconformity. Max  states that though she originally cut her hair to support her friend, she now feels the style really suits her best, and thus takes agency over her own gender presentation. But the most heartwarming moment comes not from Max, but from Kirill – who, after staging a mock prom in congratulations for Max, twirls around the dance floor with his sister, whose own (presumed) gender identity parallels the classmate from Max’s past.

Whether or not Double Decker‘s attempt at calling out the bullying of trans students and empowering gender nonconformity works for you probably depends entirely on the standard you hold it to. If nothing else, it’s difficult to deny that the episode means well.

…BUT NO (EXPLICIT) LESBIANS

On the flip side, while it was a welcome surprise to see trans issues take such a center stage in this episode, there was a disappointing lack of Max/Yuri – who, judging by the ending credits, were our best real shot at a same-sex pairing achieving the mythical canon status in this anime.

Not that Max and Yuri aren’t in a relationship – at least, there’s no evidence otherwise and there’s some pointed implication that they might be. It’s revealed that they live together, and that Yuri considers Max a person who taught her warmth (remember, she’s technically a robot). At the ending scene’s mock-prom, they share a dance. You certainly get the sense that Max and Yuri are a couple. But you don’t get the kiss, either.

Furthermore, Yuri is still a bit of a wildcard, now being the only leading agent without significant showtime dedicated to her own motivations and goals. And though Yuri’s interest and affection for Max seems genuine, we have no idea what her existence as an android means within the context of friendship, romance, and sex.

Overall, a dumb episode with a sprinkle of poignancy. It’s complete filler, and does nothing to further the overarching plot or present any elements or devices that will likely ever be returned to later. Filler isn’t unforgivable except when you are billed for only 13-episodes. We’re already over the halfway mark, and we still know almost nothing about our antagonists, except that somehow Anthem is being distributed around the region – but we knew that at the beginning of the series, too.

WHERE TO WATCH IT (LEGALLY): Funimation (dub), Crunchyroll (sub)