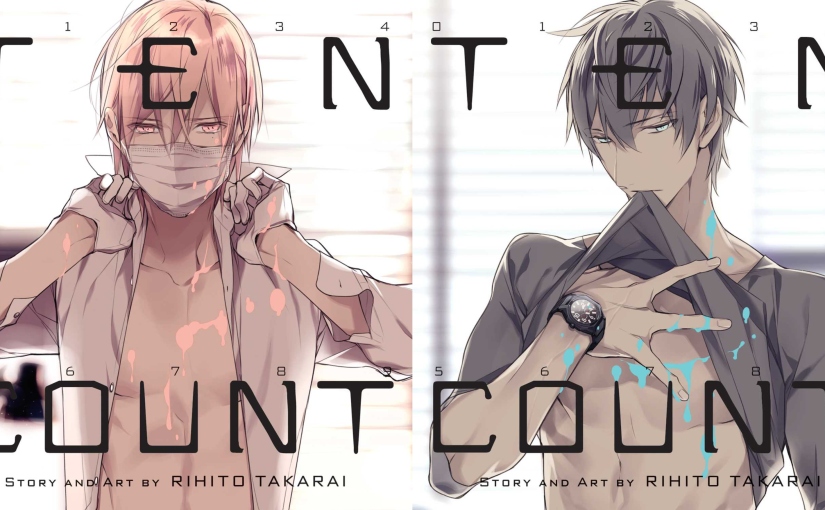 Rihito Takarai’s popular 6-volume manga Ten Count is soon ascending to the exclusive ranks of Boys’ Love anime adaptations, and no surprise. Licensed in English by SuBLime, the series has garnered quite a reputation for its love story postmarked with mental illness. Ten Count is so mainstream I found my copies on the shelf at my local public library. (Thanks for the yaoi, tax-payers.)

That’s a solid 10/Ten Count, officer. No one really drops the elusive G-word (it-which-must-not-be-named, “gay”) but this isn’t chaste Pure Love Beyond Gender, either. The dudes are sexually attracted to each other, and prove it.

31-year-old Tadaomi Shirotani suffers severe mysophobia and obsessive-compulsive disorder, which he loosely manages through excessive hand-washing and wearing gloves whenever he leaves his sterilized apartment. He works as an executive secretary for a CEO, who is narrowly saved from a car accident by a random passerby. The passerby in question is 27-year-old Riku Kurose, who immediately diagnoses Shirotani’s germophobia by the bloody splotches seeping through his white gloves.

Kurose just so happens to be a licensed psychotherapist at a nearby mental health clinic, and Shirotani promised his boss he’d extend his thanks to the dude who casually saved his life, so the pair meet up at a cafe. Kurose dives right into treating Shirotani’s illness via some friend-to-friend, unofficial, off-the-clock exposure therapy. Assignment #1 is writing a list of ten things he is too afraid or disgusted to do in chronological order of severity.

Kurose motivates Shirotani into knocking out the easiest items on his list, like opening a doorknob without wearing his gloves. Shirotani progresses so well, they set up a date for a two-for-one miniboss – eating out together at a restaurant, which they will arrive at by train. But a jittery Shirotani has a nervous breakdown on the train, causing Kurose to carry him back to his clinic and apologize for pushing Shirotani too far. Shirotani explains that he worked himself up because he was really looking forward to their outing – something his illness had prevented him from enjoying for so long. It’s Kurose’s turn to be overwhelmed: he leans in to kiss Shirotani, but stops himself at the last moment.

Kurose withdraws from Shirotani’s life, encouraging him to try the exposure therapy techniques with other people. Shirotani goes on outings with a colleague, hoping that if he makes progress, Kurose will want to try dinner with him again. But instead of rescheduling their date, Kurose retreats completely, shaking Shirotani’s bare and battered hand in sayonara before disappearing.

If volume 1 was completely chaste, volume 2 wastes little time in revving up the sexual tension into unapologetic erotica. After a short period of separation, Shirotani’s symptoms worsen to the point where he cannot leave his apartment, though when a colleague beseeches Kurose to reach out, the pair have a confrontation that ultimately leads to a love confession and sexual encounter – complete with Kurose’s warning that if Shirotani keeps seeing him, he won’t be able to keep his hands to himself.

As you may have guessed, Kurose jumped ship because he felt guilty for his attraction to the vulnerable Shirotani. Even though he was providing therapeutic intervention strictly as a “friend” and not a doctor, his professional code of conduct blares the alarms for ethical exploitation. Nonetheless, when Shirotani doesn’t reject his feelings upon their reveal, Kurose opts to alter the nature of their relationship – or at least uncover the obvious sexual tension between the pair.

Shirotani, whose germophobia has caused him to compulsively avoid skin-to-skin contact with others since childhood, is torn between arousal and disgust. But he is compelled nonetheless into another, even more graphic sexual encounter – and this time, in Kurose’s own apartment. 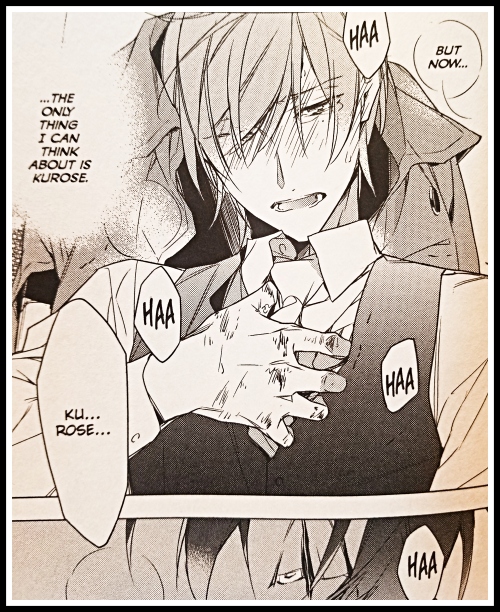 Volume 3 escalates the relationship into kink. If it was already the case that Kurose was dominant, he steps into the role more confidently without pesky things like ethical considerations getting in the way. It isn’t that Kurose has fallen completely into the common yaoi trope of rape-til-you-love-it, but we start to see the old “your body wants it” and other sexual pushiness that readers will either find distasteful or steamy.

What’s more noteworthy is Shirotani’s own development. A brief flashback suggests that as a child, he spied his father, a professor, having sex with a young female student, which may have been traumatic enough to establish or escalate some of his germophobia. And as Shirotani considers his own feelings toward Kurose – which he isn’t ready to label love – he demonstrates concern over Kurose’s own well-being against germs by demanding he disinfect himself or wash his hands.

By the way, Shirotani claims that his mysterious Number Ten isn’t sex, which leaves two mysteries: what it is if it’s not sex, and why the fuck it’s not sex.

Shirotani’s mysophobia is central to his character, and it’s so pervasive that Shirotani’s quality of life is severely impacted – visually represented by his raw and bloodied hands. Even so, Shirotani has been able to manage his illness using a variety of crutches – gloves, hand sanitizer, and skillfully avoiding triggering situations. Shirotani also recognizes that his behavior is irrational, but isn’t motivated to seek treatment until Kurose invites him into it. 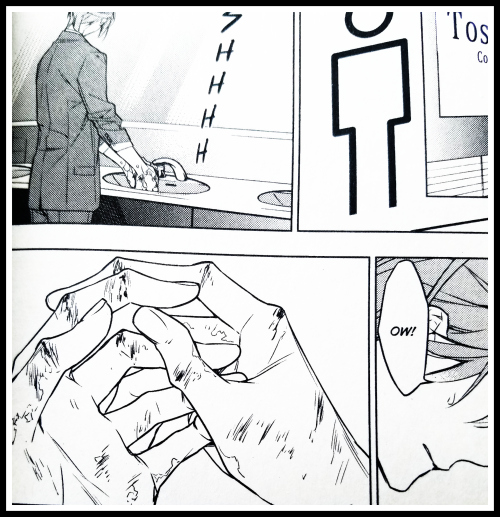 Stripping away Shirotani’s illness, he might come across a fairly typical BL uke, complete with sexual shyness betwixt wanton desire, frequent emotional vulnerability, and stubborn naivety that two men can have a relationship. But Shirotani deserves some credit: his mysophobia gives him a personal quest for self-improvement independent of his seme, even if the seme in question is a narrative mode for both recovery and growth. Shirotani, at least so far, isn’t afraid to let Kurose know when he’s crossed lines, or set his own boundaries.

Kurose, on the other hand, remains mysterious. In volume 1, his self-restraint and consideration of both Shirotani’s feelings and mental health is refreshingly pure for a genre often characterized by pornographic fantasies that take place in a world where consent doesn’t matter. This restraint begins to fade – albeit with Shirotani’s permission – by volume 2, when Kurose unleashes the usual ultimatum. 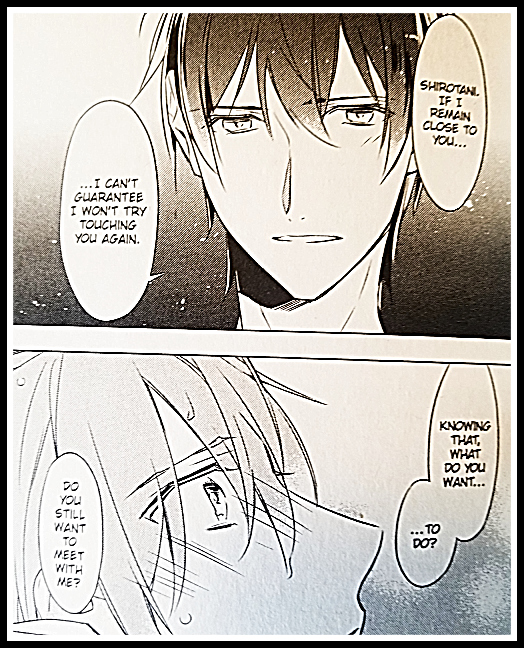 It isn’t that Kurose becomes intentionally inconsiderate of Shirotani’s health and wishes. While he is interested in being sexually dominant in a relationship with Shirotani, he demonstrates some caution and respect for Shirotani’s compulsions. If it’s clear what Shirotani sees in Kurose – that is, a catalyst for change – it’s uncertain what Kurose sees in Shirotani. Shirotani himself has few traits beyond good looks that Kurose could ostensibly be drawn toward, which begs the question: is Kurose interested in Shirotani because he has mysophobia, and if so, how extensive are the problematic implications? Kurose suggests with sour romanticism what kind of relationship he wants when he switches gears from wanting Shirotani to be self-reliant to wanting Shirotani to rely on him. 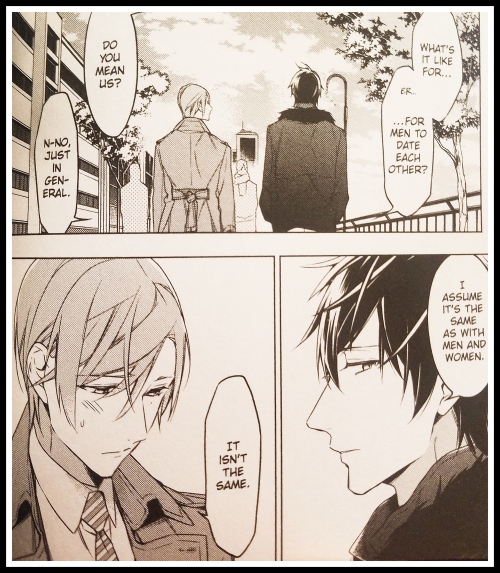 If Ten Count has a foundational flaw, it’s that it sits in a tenuous spot between a genuine exploration of a real debilitating mental illness, and yaoi erotica. It’s difficult not to consider things like whether or not Kurose is exploiting Shirotani simply because the first volume established serious groundwork to their relationship. Since the narrative itself initially suggests the audience take it seriously, it’s difficult to swap into “all’s fair in love and yaoi” mode when things begin to teeter.

The second half of the series has the delicate task of pushing Shirotani’s personal agency and recovery and humanizing Kurose (perhaps by revealing his own vulnerabilities), both without denying its sexually explorative premise. If it fails, c’est la vie – whose fault is it for taking yaoi too seriously in the first place?

WHERE TO READ IT (LEGALLY): SuBLime (ENGLISH), SHINSHOKAN (JAPANESE)