Nio Nakatani’s popular yuri manga-turned-anime has already drawn attention just three episodes into its 13-episode run. At face value, it’s hardly groundbreaking: a high school GL romance featuring a popular and intelligent student council president ‘seme’ with long silky black hair, and a younger light-haired ‘uke’ who stumbles around awkwardly and isn’t notably capable at doing anything except capturing the previous girl’s heart. But to hammer this show down to cliches would be to pulverize the delicate details that make Bloom Into You so worthwhile. 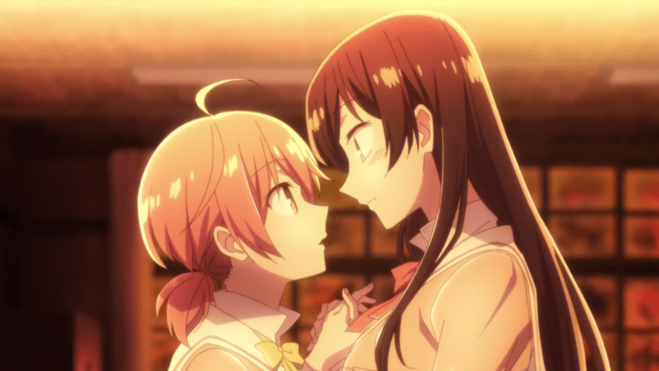 There is no question about whether or not this is a yuri anime. Though the romance is one-sided within the context of the first three episodes, there is an on-screen kiss in episode 2. Additionally, Touko is stated to have been frequently asked out by both male and female classmates.

Yuu Koito, who is entering her first year of high school, has long been enamored with the love stories that drench teen girl media. She wants desperately to experience the exhilarating high of being in love herself, but when a male classmate asks her out, she feels absolutely nothing. While her female peers gush over their crushes, Yuu wonders if she is simply incapable of falling in love. (For a pink-haired anime schoolgirl, Yuu may be a bit of a nihilist.)

When she overhears Touko Nanami, a popular student council member, reject a love confession, Yuu thinks she may have found a like-minded confidant and consults her for advice. The warm and beautiful Touko explains that she has simply never met anyone who has made her heart pound, and reassures Yuu and coaches her through her feelings. Thanks to Touko’s reassurance, Yuu gains the confidence to clearly reject her male classmate.

Everything changes when Touko suddenly states that she thinks she is falling in love with Yuu. Yuu, who only met Touko this episode, is understandably a little taken aback, but the moment is left unresolved. When she later questions Touko about what she meant, Touko kisses her.

But the dispassionate Yuu can’t return Touko’s feelings. She doesn’t understand what Touko sees in her, and is frustrated that Touko isn’t impervious to romance after all. Touko apologizes for being so forward, but says she doesn’t mind if her feelings are one-sided: she’s simply happy to feel them at all.

Yuu, who had already agreed to be Touko’s campaign manager as she runs for student council president, makes good on her promise and delivers an earnest speech before the whole student body. Touko naturally wins the election, but not before the two share a heartfelt talk about her own insecurities.

Bloom Into You‘s strength isn’t in its premise, but rather its execution. The artistic direction of the show adorns the minimalist plot in intentional use of color palettes – ranging from warm golds when Yuu and Touko are connecting to complete grayscale when Yuu feels an isolating lack of romantic interest. Scene direction is equally interesting, with lulling focus on nature, such as leaves blowing in the wind, to odd angles and reflections. True to the efflorescent implications of its title, the student council building where Yuu and Touko reveal their feelings is surrounded by flowers.

Perhaps most notable is that, as of three episodes in, Bloom Into You has not once relied on fanservice or even overt sexuality. No panty shots, no shots of the girls deep in thought while naked in the shower, no boob grabs, or any of the other usual suspects. The series is strictly about feelings.

Yuu’s feelings of isolation are vividly illustrated by a reoccurring visual metaphor of her being underwater – the opposite of flying in the air, which is how she imagines love to feel. The sensation of being left behind, or worse, being permanently different, can be stifling to any teenager. Yuu’s disturbed introspection and loneliness are recounted in pensive narration and imagery of her standing alone in vast surroundings, from oceans to outer space.

Yuu is drawn to Touko out of an initial sense of camaraderie, in that ostensibly Touko also lacks any romantic inclinations. But this is abruptly subverted when Touko suddenly declares attraction to her. This only serves to confuse Yuu further and widen her sense of isolation, but within the first three episodes, Yuu is able to speak with Touko earnestly about her feelings (or lack thereof), at least as best as she herself understands them.

On the other hand, Touko keeps her own insecurities and fears under tight wraps. Her outward persona of grace and confidence is admired by many, and she has the act down perfectly. Not even her closest friends seem to suspect she would want anything other than to rise to the role of student council president, and have all eyes on her. Yet it is Yuu that notices her hands shaking before a campaign speech. Yuu takes Touko to a private space to prod her about it, and offers comfort when Touko opens up. 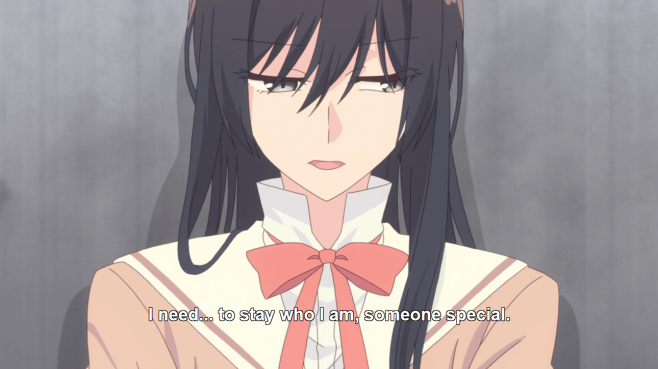 But Touko admits to Yuu that when she was younger, she was a shy and mediocre student who had no friends. One day, without specifying any impetus, she simply decided she had to change, and so deliberately remodeled herself into the perfect person she wanted to be. Though she was astonishingly successful, her own insecurities have not metamorphosed along with the rest. It’s Yuu’s turn to reassure her: because Yuu doesn’t idolize Touko, she sees her clearly how she is, so there isn’t any need for Touko to hide her flaws.

We don’t have a pairing yet. It isn’t because the pair in question hasn’t brought communication to their burning sexual tension, but because the interest is one-way.

Yuu has not verbalized or otherwise clearly indicated any reciprocal feelings for Touko yet. If she is developing any special place for Touko in her heart, one would have to squint for clues and arrange them carefully: reaching out to hold Touko’s hand in episode two with a small blush, a willingness to uncover a facet of her personality hidden from other friends, or an admiration for Touko’s leadership and grace.

There is a pointed irony in that Touko is introduced into this story as a girl who has rejected numerous love confessions, only to have her own first confession rejected. In real life, Touko’s tireless behavior might come across as desperate and irritating, but Touko is so sweet and warm, she manages to be extremely likeable – no small feat for a GL “seme”. Beyond a sudden kiss (for which she offers an apology), Touko has more or less been respectful of Yuu’s personal space.

BUT ARE THEY LESBIANS OR JUST SO ~PURE~?

Being so refreshingly void of fanservice means we don’t have to watch the usual cringefest of teenage anime girls groping and groaning. But absent of that, we run the risk of emitting “pure love” – love so good and pure that it surpasses the boundaries of human gender. Which sounds sweet, and it can be – but it strips the dynamic of anything actually gay. It reduces their romantic interactions to platonic intimacy rather than something sexually charged.

Bloom Into You sets the precedent for lesbianism even before establishing a relationship between its main players. Touko has been asked out by girls before, the series claims, and has had women among her admirers. Of course, she has rejected them, as she had boys – but her lack of interest in her confessors might have had sharper clout if her admirers had been exclusively male and she had rejected them because she was a lesbian. Alas, it isn’t clear that Touko is gay or straight or anything but interested in Yuu, the first person she has fallen for. Nor, to be frank, is it entirely clear why Touko has such a sudden and uncharacteristic interest in Yuu. In the absence of other evidence, it seems that Touko was attracted to their shared habit of rejecting love confessions.

Likewise, Yuu’s isolation from romance has not demonstrably been because she has yet to come to terms with her own alleged gayness. So far, Yuu hasn’t developed any kind of romantic or sexual orientation at all yet. That’s hardly unusual for a teenage girl; it can take time to develop those kinds of interests. After all, many teen girls feel pressured to date before they are ready, a feeling exacerbated certainly by the romance-drenched media we throw in their faces – as Yuu herself demonstrates. But as the title implies, I expect we will watch Yuu “bloom” – whatever that means (and I think we have a guess). Either way, it’s a tough balance to explore lesbianism among teens without being exploitative while still being authentic to female sexuality. I don’t mind that Bloom Into You has kept things so sweet, because the male-targeted alternative is more obnoxious, but I am less keen in knowing that Yuu and Touko are connected because they “understand one another” and more in seeing them connect because they have gay interest in one another.

I have to admit that while I was feeling obligated to watch this because of GL, I wasn’t really looking forward to it, either – I’ve been jaded too many times by bad high school yuri with uncomfortable fanservice and a wooden cast of moe aliens who act more like toddlers than young adults. But what a pleasant surprise. I’m astounded that I like both Yuu and Touko as much as I do, and if the gratuitous artistic visuals are pretentious, I’m willing to indulge a little. Even with a simple plot, this show is lovely and atmospheric, and if it can keep it up, Bloom Into You could win a place as one of the best yuri anime out there.

WHERE TO WATCH (LEGALLY): HIDIVE