Episode 5: The Problem With Choices

The slow burn continues to sputter at ignition, and that’s the best tagline I’ve got.

The plots of these episodes are difficult to summarize, since not much effectively happens. Considering the artistic merit of the series, that hasn’t felt like a problem in the past, but we are getting dangerously close to dragging.

Yuu works her part-time job at her family’s bookstore, and takes note of the different kinds of books her friends like to buy, demonstrating her well-cultivated powers of social observation. One of her friends is writing a book, and asks Yuu to take a look at her draft – who the hell knows if that’s important or not. Midterm tests are coming up, so Yuu wants a study buddy, and the only available human in all the school is, of course, Touko. When the library gets too full to find space, Yuu invites Touko to her house to study, where they eat cheesecake. Yuu’s sister and her sister’s boyfriend joke about the pair giving off gay vibes. They are clearly not watching the same series as me, because I’ve seen more mutual romance between two potatoes.

The only indication of progress we get is that Yuu (internally) admits that she appreciates the fact that someone thinks she’s special and wants to be with her, even if she doesn’t return her feelings.

THE SLOW BURN: STILL NOTHING

Touko’s infatuation with Yuu expertly manages to stay cute and respectful, with minimal breaches of personal space. Though I’m still a little unsure of why, it is clear that Touko feels real affection and real attraction toward Yuu, and seeing her blush and stutter in Yuu’s room while doing her best to keep things professional was pretty cute. In contrast, Yuu continues to treat Touko more coldly than her other friends, and shows absolutely zero attraction. At most, Yuu offers begrudging tolerance of Touko’s crush on her.

We’re offered a direct comparison with Yuu’s sister and her long-term boyfriend, who apparently frequently visits the Koito household for family meals. Though they don’t take up too much of the spotlight, their amicable and friendly relationship is a point of interest to Yuu, who almost childishly says to herself that she “has someone, too” and isn’t alone. 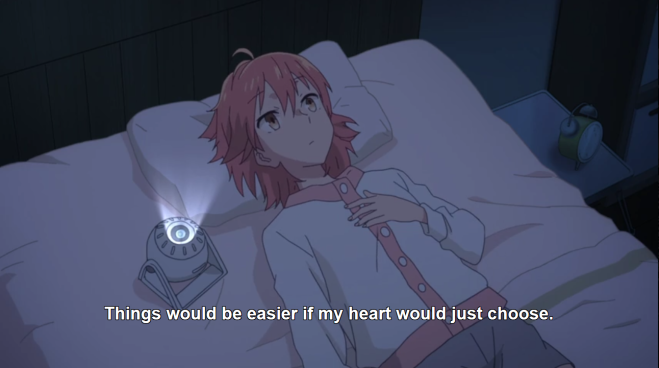 Patience may be a virtue, and this show still stubbornly sticks to subtlety and visual metaphors to demonstrate Yuu’s state of mind and development. But at this point, we are nearing the halfway mark, and I still have no more reason to believe Yuu has any sexual orientation yet at all, let alone same-sex interests. And this time, there aren’t any particularly breathtaking visuals to compensate for the lack of plot development, either.

Despite herself, Yuu does seem to be developing some attachment toward Touko as a person, but the cues are somewhat indirect and condescending – for instance, believing that Touko has only exposed her weaknesses to Yuu and therefore Yuu has some obligation to support her, or having someone of her own to fill the social gap when her sister teasingly suggests she wants to steal her boyfriend. Her apparently frequent use of the planetarium projector that Touko gifted her suggests a more symbolic connection, but it seems instead to reflect Yuu’s feelings of solitude and isolationism.

More explicit than the platonic attachment is the lack of sexuality: most pointedly this episode when Touko describes to Yuu how her heart speeds up whenever Yuu’s around, and Yuu wonders what that must be like – suggesting she still experiences zero romantic or sexual interest.

At very least, it’s nice that Yuu’s male classmate and fellow student council Maki continues to abscond from from any beckoning as a rival romantic interest. He really is just a cheerleader on the side, which may cheapen his character by reducing him to mere support status, but also prevents tedious triangle drama. But on the other hand, if Bloom Into You continues to dillydally, I might have to welcome even the most cliche drama to inject some energy into the series.

WHERE TO WATCH (LEGALLY): HIDIVE (dub and sub)

One thought on “REVIEW: Bloom Into You (Episode 5)”