If episode 3 sagged a little under the weight of its lackadaisical plot and character development, episode 4 shrugs that burden right off its shoulders, pops the pin of a grenade and jumps gloriously into action.

Part of this could be is that Doug and Kirill are stagnant until we a) learn more about Doug and b) Kirill is able to either advance the plot or personally level up, and the story doesn’t seem to be willing to budge on either point yet. So the best course of action is to swap MCs, ramp up the personalities of its side characters, throw in a few minors twists, and dial the comedy to an eleven.

PLOT TWIST! Doug’s previous partner, Derick, is not actually dead – he recovered in a hospital and quit his detective job to pursue his professional dream of becoming a bartender. That’s the title of the episode, but it isn’t the plot. With a wink, Double Decker wraps that minor plot point up before cracking the opening credits, and moves on completely to focus on completely different characters.

Enter your episode’s MC, Katherine “Kay” Rochefort, who retains the title of newest member of Seven-O after beating out Kirill within a matter of hours. Kay’s been partnered with the bellicose sniper Deana del Rio, code name “Pink” (three guesses how she got that nickname). Deana’s rough and contumacious style has precious, law-abiding Kay pretty uncomfortable: Deana’s a jaded, trigger-happy hellion who is willing to pursue and apprehend suspects even outside of Seven-O’s Anthem-exclusive jurisdiction, and Kay has this insane idea that law enforcement should also follow the law. When Kay’s harping about rules causes a drug-dealer to escape, Deana’s explodes at her and tells her to cut that law and order shit out, or so help her. 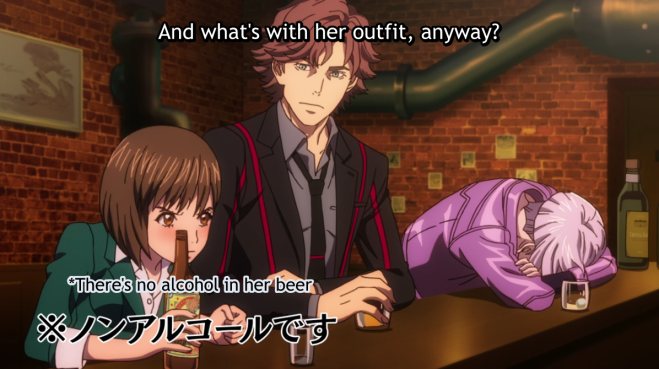 A distraught Kay vows to level up as a detective. She contacts Gary, an old colleague who works in the normal non-Anthem Drug Control Division, to put him on the case of the drug deal they failed to bust, thanks to her ethical quarrels. But turns out, Gary works with these drug dealers to sell them fake Anthem. He abducts Kay, as well as Kirill and Yuri, who were found trailing Kay.  Threatening to murder Kirill and Yuri, Gary tells Kay to get him one of the special Anthem antidote bullets that the veteran Seven-O agents shoot at morphed users.

Even more distraught, Kay is forced to play along with Gary’s evil plot and ask Deana for the magic bullet. But when Gary opens fire, Deana, who had sensed this was a trap, is ready for the counter. She chases Gary down until he takes Anthem himself. Deana literally couldn’t give a shit if he’s morphed into a rampaging monster, she kicks his bitch ass anyway. Kay vows to be a better partner for Deana, and Deana reveals with scoffing fondness that she used to have a partner with the same name.

(The other agents reveal that “Kay” was just the name of Deana’s dog.) 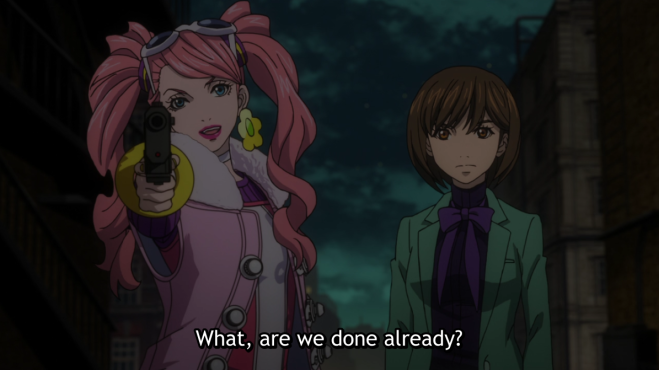 Back at the enemy hideout, Yuri, whose code name is “Robot”, uses robotic powers to break free and reveals that she was sent to distract the enemy henchmen. Kirill was sent by Doug to tag along behind Yuri and learn from her, and had no idea they weren’t actually being kidnapped. Max busts in on her motorcycle to help arrest the henchmen, but Doug is a no-show.

Kirill gripes to Doug that he didn’t come save him, and then gossips that he thinks Yuri might actually be a robot. Evidently, the fact that Yuri is an android is common knowledge, but Doug decides to troll Kirill and pretends to be shocked at his revelations.

Deana, like Doug, is an extremely capable agent. She is bold, brazen, and badass, and when she’s backed into a corner, she overwhelms her opponents with brute force. Like Doug, her “Double Decker” partner is a bright-eyed newbie. You sort of expect that the newbie in question will complement her partner by somehow filling in whatever gaps Deana has in her expertise, even if it’s as simple as offering a fresh perspective on some predicament, but episode 4 awarded Kay absolutely nothing besides a heavy serving of humility.

It isn’t that Kay is incapable, but she lacks serious field experience, and her bookish adherence to rules only causes trouble. If Kay managed to expose corruption in the Drug Control Division, it was unintentional and paid for at her own expense.

Kirill and Kay both should, according to rookie formula, demonstrate their potential as detectives upon their introduction in a way that impresses or interests their veteran colleagues. But Double Decker scratches that trope and lets them fail and flail. The veterans, Doug and Deana, allow Kirill and Kay to endanger and humiliate themselves. Not because they think Kirill and Kay will learn better this way. They just seem to think it’s funny.

Kay is a cutie, and Deana’s larger-than-life personality makes her a scene-stealer, no matter how much of an asshole she is. Perhaps next episode will center around Boxer and Yuri (which obviously begs the important question: if Yuri really is a robot, does the potential GL with Boxer really count as lesbian? We’re running with “yes” in the absence of evidence to the contrary.)

Double Decker is still lacking an overarching plot, but as the narrator quips in a post-credits scene: “Now that you know Doug’s a huge asshole, you know everything you need to know about the characters in this story! Now the story can really start to move!”

WHERE TO WATCH IT (LEGALLY): Funimation (dub), Crunchyroll (sub)