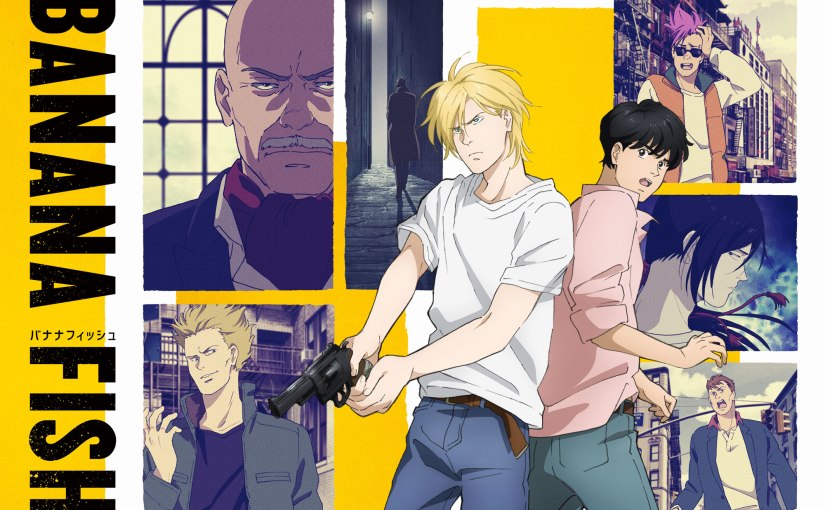 The Snows of Kilimanjaro | キリマンジャロの雪

After waiting an extra week for the next episode, we are officially rolling into the second half of the series. It’s Halloween night, and Ash is going trick-or-treating. Well, it’s like trick-or-treating, but instead of going around getting candy from strangers, he’s single-handedly massacring an entire mafia faction. His costume is that he’s a badass and he’s armed. Ooh, spooky.

Two weeks feels like a lifetime ago since the last episode so you may not remember where we left off, but I got you, fam: Ash stole all Dino’s money, Dino left the country and put Arthur in charge of the Ash extermination unit, Ash is murdering them first. Also, Eiji threw a Halloween party, which was so much fun that Eiji’s now passed out on the couch. Ready, and action.

Ash pulls his two favorite goons aside and tells them he’s heading out for a duel-to-the-death date with Arthur tonight, and so he needs them to stuff Eiji on a Tokyo-bound airplane in the morning. The goons protest that they love Eiji and anyway, wouldn’t forcibly deporting him make Eiji feel betrayed? Ash says that’s chill, whips out his sunglasses and saunters off to have himself a Halloween knife fight.

Cain Blood and his Black Sabbath gang are called to stand guard over the chosen coliseum, in this case, a closed subway station that runs a down-for-maintenance F line train. (Of course, the fucking F line.) Cain actually doesn’t seem to be picking sides and seems pretty fine with letting these two blond assholes stab each other to death while his dudes guard the exits. They head down to the platform where Sing, that Chinese kid and Shorter’s heir apparent, pops up out of nowhere to watch the fight. It’s just that the Chinese mafia is so good at being sneaky, honest. It isn’t that Cain’s security is terrible.

Then, of course, twelve seconds into the knife fight a supposedly closed station lands a train filled with Arthur’s guys, who immediately open fire on Ash. It also turns out that Chinese gangsters were hidden absolutely fucking everywhere, they are raining from the ceiling. What the shit, Cain, your security is terrible!

Ash, who honorably gave up his gun so they could knife-fight like gentlemen, has to dodge bullets for a bit until Sing – who I seem to remember vowing to kill Ash just like two episodes ago – tosses Ash his gun. Now the Corsican train gangsters do a massive oh-shit as Ash proceeds to head-shot approximately all of them. They start up the train with Arthur in it to make an escape, but Ash jumps through the closing doors. Trick-or-treat!

Okay, back to Eiji, who wakes up to notice Ash is gone. He starts to leave, only to run into those two goons – who probably do have names, who knows – who sheepishly tell him they are escorting him to the airport. Eiji’s feelings are hurt, but he definitely doesn’t hate Ash. He recognizes they live in two different worlds, and though he doesn’t agree that this means they can’t be together, he monologues that he will respect Ash’s decision. Then, the two goons inexplicably let drop that by-the-way, Ash presently is nuking it out with the walking dickhole Arthur, so-

SAY NO MORE, goes Eiji, as he body slams them, escapes, and runs through the streets to find Ash.

I bet you were wondering about this episode’s literary-inspired title – this time, we get it spelled out for us. Brief flashback to a scene from like… yesterday, when Ash relays to Eiji the story of a leopard’s body discovered frozen on the snowy peak of Kilimanjaro. Ash admits he’s not afraid of death, but relates to the leopard who climbed so high only to die. Eiji reminds Ash that, despite ongoing narrative comparison – and this is important – he’s not actually a cat.

Okay, back to the present. The sun is rising and train pulls above ground onto a bridge toward Coney Island. Ash and Arthur get out to resume their knife fight. (Just to be clear, Ash relinquished his gun so they could have a fair fight. Apparently that time Ash sliced Arthur’s fingers off sort of makes it hard for him to fire guns, and also apparently, we care.) Things get bloodier. Arthur yaps that he really fucking hates Ash, which is helpful, because up until this point that had been kind of vague. 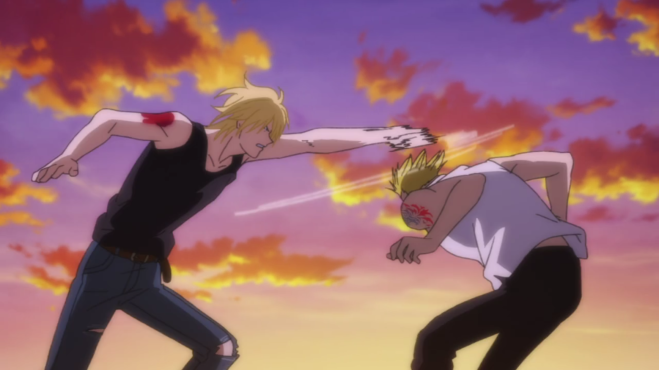 Eiji get to the battle arena and sees a big crowd of gangsters jeering on the fight from below. Eiji screams Ash’s name, which naturally causes Ash to startle and Arthur to get the one-up on him. But Ash goes into his Limit Break and throat-stabs Arthur, and after thirteen long episodes, Arthur falls off the bridge to his death.

From up high, Ash screams to Eiji that he was supposed to go back to Japan, and he really hates Eiji seeing him like this. The throngs of violent criminals below, who think this is all hilarious, go wild and cheer Ash’s name. Which isn’t great because the police pull in and arrest everyone and now it’s kind of obvious who is responsible for 100% of the night’s carnage (thanks a lot for all the help, Cain and Sing. Really appreciate how your boys did FUCKING NOTHING.) Ash, who has actually just been through a lot, passes out and is stuffed into an ambulance, which incidentally is his preferred vehicle of arrest.

Eiji tries to break through the line of police officers to get to Ash, gets arrested, and envisions Ash falling to his death. I get the feeling Episode 13 is trying to imply something, but I just can’t put my finger on it.

FINE, LET’S GET THE HIM OUT OF THE WAY

We finally lived out the opening credits knife fight sequence, and thank fuck. In all fairness, Arthur was a great villain because he was so easy to hate. He was a slimy dickhead that really ticked all the boxes: personal grudge against protagonist, hungry for absolute power, probably tortured animals as a small child. His personal involvement in Shorter’s death and Ash’s torture really make him teeth-grindingly nasty.

Arthur will undoubtedly get ragged on for being one-dimensional as a villain. It might be true: as a character, the only fleshing out he got was at the pointy side of Ash’s knife. No sob stories or redeeming features for this dude – Arthur’s only backstory is that he’s always been a scummy little bitch who cheats in death duels, and his only redeeming feature is his fabulous seiyuu. And you know what? That’s okay. I’m fairly comfortable believing that some career-gangsters whose day-to-day job responsibilities involve kidnap, torture, and murder might just be assholes, end of.

If anything, my problem was that Arthur is really just a mini-boss, both in terms of plot and actual narrative impact. He’s not quite memorable enough for his death to feel like anything but long overdue. Plus, while he certainly earned a spot in Ash’s Death Note, he’s really not Ash’s biggest problem, either. Arthur is an irritation where there are bigger fish to fry: namely, Banana Fish, and “Papa” Dino Golzine himself (and everything he represents to Ash).

Ultimately, Arthur was just way more into Ash than Ash was into Arthur. And since Arthur basically has no personal connection to anyone or anything else in the story, this won’t affect the plot much beyond probably pissing off Dino some more.

THE LEOPARD ON THE MOUNTAIN

Ash has gotten morbid. When visiting Max last episode, he pauses to ask him to continue investigating Banana Fish even if Ash dies. Sending Eiji back to Tokyo during the knife fight was surely a similar consideration. Even during the train massacre, Ash wonders if this will be the night things end for him. 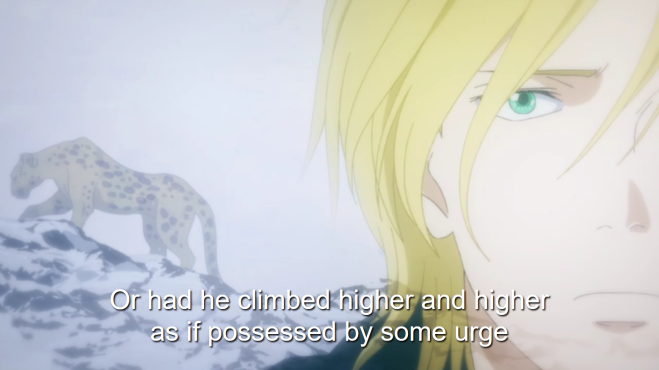 He isn’t afraid of dying, Ash articulates. He explains his feelings with the metaphor of the leopard frozen in the snows. Its corpse is discovered and no one knows why it climbed up so high. Was the leopard hunting something that led it to dangerous heights? Was it guided by some powerful determination to make it to the top? When it died, was it trying to find a way back down again, or trying to ascend even higher? Either way, Ash ponders, the leopard must have realized at some point it could never return. 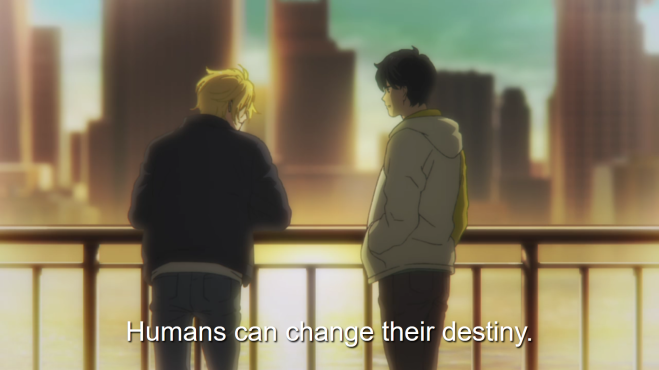 Eiji asserts humanity onto Ash when Ash fears he has none. Whether he’s a devil or an animal – both dehumanizing accusations are lauded upon him by friend and foe alike – Ash believes he has traveled too far up the mountain to come back down again. But Eiji is there with him: and if he can’t pull him back down, then Eiji is content to stand at Ash’s side.

But the higher up Eiji climbs to reach him, the more of a monster he will see in Ash. At least, that’s what Ash fears. 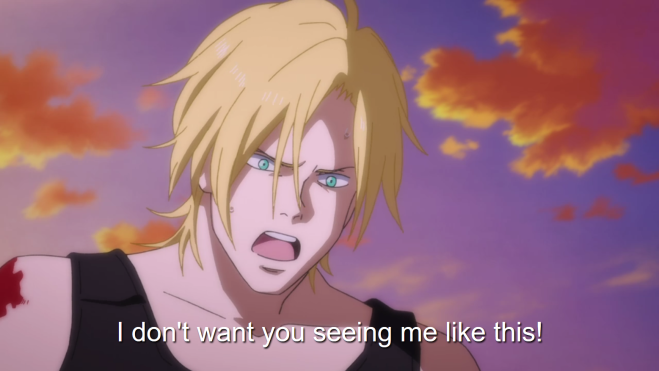 Ash lied. He is terrified of Eiji hating him.

It was a good episode, but not as great as some of the others. I never worried that Ash would lose against Arthur, and with Eiji barricaded from the action and the rest of the main characters completely absent, the stakes were hardly to the heights of Kilimanjaro. The episode was also less emotionally-driven beyond its pensive mulling over death, so that meant we had one episode dedicated to one showdown against a mid-tier villain. But hopefully with Arthur out of the way, the plot will be freed up to address the larger threat of Banana Fish and Dino’s empire.

Of course, initial plot control will be stymied by the fact that Ash has been arrested again. Not sure how Ash is going to shimmy his way out of this one, since he’s covered in blood and only some of it is his, and he just crawled his way out of a murder train filled with corpses that practically have his name on them (it’s basically audible. Oh wait, that’s the incriminating chanting of onlooking violent criminals. Thanks, you fucks, real helpful.) Also, oh yeah, he violated parole, so there’s that.

There’s a good chance that back in prison, Dino will pay off and/or threaten whoever he needs in order to get to Ash, who is basically a half-slaughtered sitting duck behind bars. So that’s not great, but on the flip side, Ash inexplicably has a lot of friends now, too. The game is still on.