EPISODE 12: To Have or Have Not | 持つと持たぬと

Ash and Eiji knock a few off Dino Golzine’s chess board. It’s a study on fears and monsters. A tale of blood, of murder, of the fleeting moral condition of humanity, and of natto and other scary things.

We open with a nice little scene of Arthur flustered, because the opposite of exterminating the defectors and capturing Ash is happening, in that Ash and his lads are slaughtering Arthur’s men one by one. It’s so brutal, that our friend Yut-Lung notes to Sing that Ash must be pretty pissed. After all, it’s not like him to be the aggressor. He usually plays defense. Sing riffs that Yut-Lung understands Ash so well because they are so alike. Yut-Lung denies this, before monologuing that he’s never going to look to the past the way Ash does, because there’s no turning back now – and ominously greets his brother Hua-Lung. (Yut-Lung, baby, the more you make me wait, the more I want to see your Limit Break.)

Max and Shunichi are still crashing together, and Ash calls them to tell Shunichi he’s bought plane tickets back to Japan for him and Eiji. (Eiji doesn’t know yet, but Ash assures them that it’s fine because Eiji will definitely hate him by that point anyway. Challenge motherfucking accepted, bitch.)

The episode proceeds into a whiplash collection of Ash strutting around New York City like he doesn’t even give a shit. First stop: pay Dino Golzine a surprise visit at the airport. (Titanium balls: another of Ash’s superpowers.) Dino can’t do anything to him in such a public space, and apparently can’t have backup flock the exits or make all the cops in his pocket arrest Ash again, so all that’s left to do is sit down together for a cheeky few to banter and exchange declarations of war. It doesn’t serve much purpose other than to get under Dino’s hair, but that doesn’t take much digging. Bald joke.

Back in the hideout – now an $8 million Manhattan condo, remember – Ash makes plans to evict and/or butcher more enemy factions, territory by territory. Eiji is kept out of the murder talk and is assigned a job more up his alley: taking photos of people who exit or enter the neighboring office building, which, as you’ll remember, is conveniently owned by Dino. Eiji has snapped a pic of a few politically-significant individuals who have been buying Banana Fish and is ready to make it Insta-famous at Ash’s word.

Ash next strolls his white ass into a hostile gang territory run by Cain Blood of the Black Sabbath (what a mouthful) to ensure he’s not already rolled over to Arthur and to command he move his guys out of Ash’s war-zone. Ash shows off his titanium balls again by showing up alone, making demands, and shooting the hand of someone who drew their gun at him before pointing his right at Cain’s head. I guess this is how gangsters show each other respect, because Cain deigns not to have his dudes rip Ash apart and instead congratulates his badassery and vaguely agrees to stay out of things.

Important plot development: Ash returns to the love-nest, where Eiji has prepared him a traditional Japanese meal. Ash eats natto and dried mackerel. He nearly vomits, but he does it.

Fermented soybeans aside, now things get a little nasty.

Ash, who has a proven track record of not killing helpless people unless they are total monsters who deserve it, executes slews of unarmed gangsters as they are on their knees begging for mercy. These guys were largely his old underlings, who were pressured into falling under Arthur’s orders. Even Ash’s loyal gang members are surprised by his coldness, though they follow his orders point-blank. 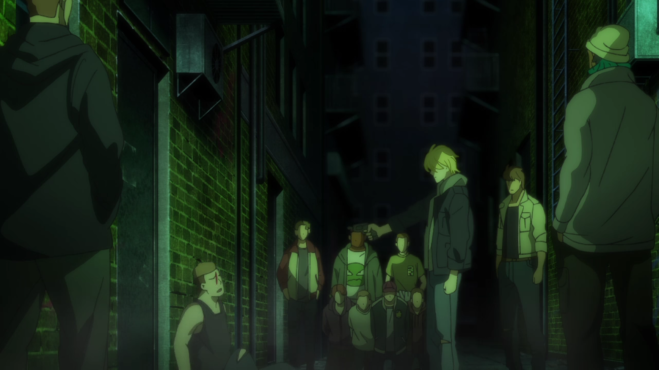 Ash comes home late at night with blood on his shirt. Eiji, who waited up for him, comments on the blood, and Ash gets defensive. Eiji may be naive, but to his credit, he’s not an idiot. He’s pretty much gotten the hint hat Ash is the one responsible for all the execution deaths reported on the news. Upset, Eiji calls Ash out on it and argues that this isn’t like the Ash he – and Shorter, and little Skip – knew. Furious, Ash says that the world he lives in isn’t about reason, it’s a unyielding and desperate struggle for power. Eiji says that’s easy for Ash to say, when he’s so powerful. An enraged Ash says he never wanted to be so talented at killing people and storms out.

When Ash doesn’t return the next day, Eiji finds him at the New York City Public Library, apparently Ash’s favorite place to unwind. Ash is still hurt, but you can’t really stay mad at Eiji, either. They wander Manhattan until they can sort out their raw feelings: Eiji only said what he did because they’re friends, and being friends means saying what’s on your mind even when it’s difficult. Ash understands, and was only frustrated because he knew what Eiji said was true.

Touching moment over, we’re back to business. Walking dickstain Arthur brings his goons and to meet with the Black Sabbath to devise a plan of attack against Ash. Cain then meets up separately with Ash to relay the message that Arthur wants to have a winner-takes-all final confrontation with Ash, but tips him off that it’s a trap. Ash sure as fuck knows that already, because Arthur’s a little bitch. But after a heavy dose of Eiji-shame, Ash also wants to end the sordid affair without purging any more collateral.

Ash stops by Max’s place to give him a few photos Eiji snapped: Republican Senator William Kippard and White House Chief of Staff Arthur Smiles. Ash then reveals the White House’s evil plan for Banana Fish: to depose political leaders in the Middle East and install new leaders who are subservient to the United States. The Banana Fish drug will enable these assassinations, and upon the collapse of those regimes, the US will step in to establish puppet states in the region without needing to send in more troops. What does Dino Golzine get out of the deal? Buttloads of money, and a LSD-laced throne over a global black market empire.

When Ash gets home, Best Boy and the lads are throwing a Halloween party, featuring Ash’s deepest and darkest fear as per last episode: pumpkins, lots of scary pumpkins. More than that, there are delicious spooky-themed treats, which Eiji has collected from the other housewives in the building (yes, he’s made friends, because he’s Eiji). Ash begrudgingly parties with them, and lightens up a little. I mean, how could you not:

The party carries on until Ash and Eiji are the only ones awake, Ash asks Eiji if he has a girlfriend. Eiji does not, and neither does Ash, though Ash humblebrags that the girls do like him. Ash says he doesn’t have any interest in them, but when he was fourteen, there has been a girl he liked. She was killed before anything could happen, though, because enemy eyes thought she was the girlfriend of Ash Lynx. Ash regrets not being able to save her, and concludes that the world he lives in will not allow him to be in a relationship with anyone.

He tells Eiji this when he’s supposed to be telling him he’s loading him onto a Tokyo-bound plane tomorrow, because as he’s just pointed out, he can’t get close to anyone. But he doesn’t tell Eiji that.

Ash sneaks out in the middle of the night, presumably to meet Arthur for a final showdown.

Last episode, Ash recalled how he dressed up as a pumpkin for Halloween one year as a child, and ended up scaring himself when he saw his own reflection. Now it is Halloween, and Eiji – whose dark features reminded Ash of Halloween – literally wears a Jack-o-lantern to tease Ash. It’s a satirical representation of exactly what is happening: as the stakes get higher, Ash rises to meet them – and he’s losing something in the climb. 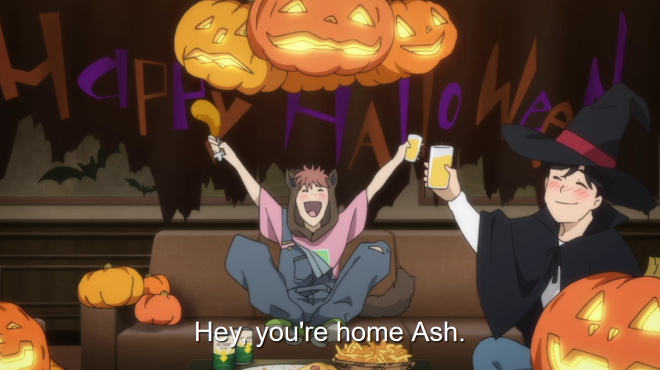 Ash has so far followed a pretty remarkable ethical code considering he has been a mafia agent, has crossed the lines he once set for himself. Ash has pretty consistently only killed in immediate defense. Earlier in the series, Ash told Shorter to spare the life of one of Dino’s agents who attacked him. Even one of his gangsters who had betrayed him got only a warning shot instead of a bullet to the head back in episode 1. Ash doesn’t like killing, and he doesn’t pull the trigger where he doesn’t have to.

There have been a couple of exceptions: he would have murdered Marvin for killing Skip, had Marvin not already been killed. He shot down a helpless Abraham Dawson in revenge for creating Banana Fish and his role in killing both his brother and Shorter. And, of course, he was willing to launch a lethal, if unsuccessful, attack on Dino Golzine. These cases represented the extreme: punishment for despicable people who would cause even more damage if left to live. 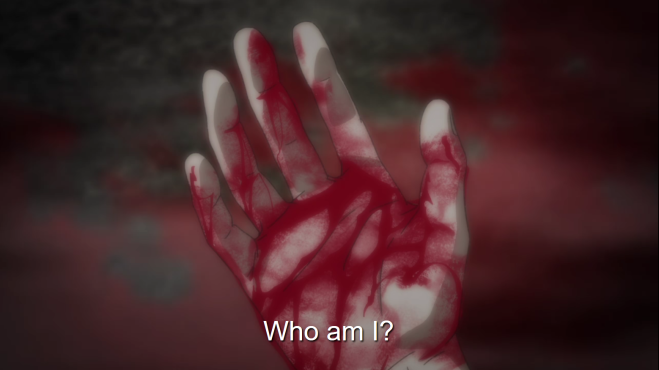 But where Ash once avoided initiating lethal conflict, a switch has flipped. In episode 12, he is directly hunting down the opposition, and he’s not only killing them, he’s executing them even after they have surrendered.

Now, it isn’t that we should spare too much sympathy for his victims, who are also almost definitely murderers themselves. More than that, they are working for Arthur, and have been killing Ash’s own men. In all fairness to Ash’s code of conduct, this is once-removed self-defense. But the thing about having principles is that they aren’t really principles when you make exceptions.

We know that Ash isn’t afraid of becoming a monster, he’s afraid that he already is one. His overwhelming longing for purity perhaps reflects on his desire to keep the innocent Eiji both nearby and preserved from corruption, which perhaps is why Eiji’s stark words cut the deepest. It’s one thing for anyone else to call Ash a devil – and you better believe everyone else is calling him that – but to hear Eiji tell him he has crossed lines is too much. 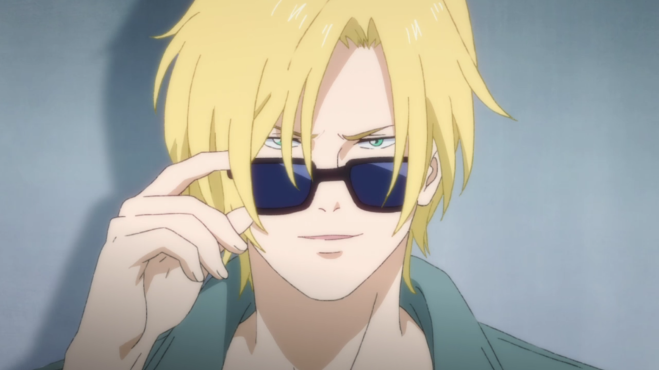 The question of how far Ash is willing to go to protect those he cares about and win against Dino Golzine – and Banana Fish itself – has yet to be resolved. The counterpoint is Eiji. Is his role to reflect the monster that Ash sees in himself, whether by having dark features, dressing as a pumpkin, or pointing out Ash’s sins? Or is it to temper the monster that Ash fears will emerge?

Technically speaking, this episode was relatively light-hearted and void of any serious or life-threatening plot developments (against the best efforts of Ash and is titanium balls). But the lead-up to Ash sending Eiji away and possibly going alone to Arthur for another potentially brutal confrontation made it hard to chill. If the Banana Fish business is as messy at it seems, Ash is going to add even more enemies to his already vast collection, and those enemies are going to be America’s presidential administration.

But we’re only halfway done with the series, now, so neither Ash nor Eiji could possibly die yet.