This charming slice-of-life about the bumbling romances of nerdy office workers isn’t the gay you need, or the gay you deserve. But don’t write Wotaki: Love is Hard for Otaku off completely. The series is nothing if not meta and blissfully self-aware. It may not be a BL, but it is about BL fangirls and their boyfriends who are, if not fudanshi, rather good sports about the whole thing.

26-year-old Narumi Momose has a secret: she is a rotten, rotten girl (that is, a fujoshi) who spends her free time devouring anime and writing erotic yaoi doujinshi to sell at anime conventions. When this dirty secret is exposed, she quits her job, moves across Japan, and applies at a new company – this time determined not to expose her inner otaku. She is immediately exposed, however, when she bumps into Hirotaka Nifuji, a socially clueless childhood friend and hardcore gamer who is now her new colleague. This drama comes to a neat conclusion by the end of episode one when it is revealed that this office is decidedly more otaku-friendly. 27-year-old Hanako Koyanagi is a fellow yaoi-lover and famous cross-playing cosplayer, and her boyfriend and the office sempai Tarou Kabakura secretly reads moe comics. Exposed and among “her people”, Narumi, whose boyfriends have always dumped her when they have found out she’s a nerd, starts a relationship with Hirotaka, where date nights are pretty much just playing video games together.

With that little problem out of the way, the rest of the series is as free as its cast to shamelessly nerd out. From regular shopping trips to Animate, to navigating the crowds of Comiket, and playing Pokemon Go long after it stopped being cool, Wotakoi is a delightful insight into Japanese nerd culture. 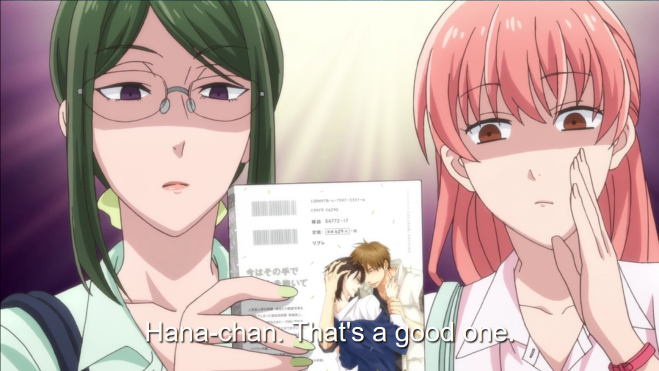 It’s not gay, but BL as a hobby is a reoccurring presence. Neither Narumi and Hanako is a goddamn casual – they spend their free time reading BL comics and light novels, shopping for BL comics and light novels, and casually shipping all the male human beings they meet (including their boyfriends). Narumi writes and illustrates her own explicit BL doujinshi, which she sells at Comiket (the biggest comic convention in Japan). Hanako has a large following as a cosplayer, as is known for dressing up as handsome male characters and doing BL poses.

Their respective boyfriends not only put up with this, they are willing to humor it – a bit. Stoic Hirotaka, who doesn’t seem to have any sexual preferences at all besides that he is a self-admitted “boob guy” (to flat-chested Narumi’s irritation), reads BL novels at Narumi’s recommendation and discusses them with her. He is equally receptive to selling Narumi’s BL doujinshi at Comiket while she’s away from the booth shopping. Kabakura, on the other hand, is more tempestuous about his girlfriend’s unconventional interests. He gets jealous when she dresses up as a guy and is flocked by fangirls, and is antagonistic to the genre – until Hanako convinces him to try reading just one light novel, which he readily admits to enjoying because at the end of the day, shoujo manga is shoujo manga and goddamn if it doesn’t make you doki-doki.

Hirotaka and Kabakura are also not above being bribed to pose for a mock BL photoshoot. Kabakura will sell out his dignity for a limited-edition action figure, and Hirotaka seems equally indifferent to pretending to yaoi as not pretending to yaoi. Narumi and Hanako occasionally squabble about who would be “on top” – the ladies’ only note of discord throughout the series.

GL gets a nod, too. Kabakura, the secret moe lover, reads yuri comics. Narumi and Hanako, while not a couple, act the gayest together out of any of the characters, and declare themselves “soulmates who share sexual interests with each other.”

Nonetheless, no actual gay couple is so much as teased. The closest realization seems to be in Hirotaka’s adorable little 19-year-old brother Naoya, who is presently developing a close relationship with a quiet nerdy classmate whom he assumes is a boy due said classmate’s androgynous appearance. Plot twist: the classmate is a girl, and rocking a crush on Naoya. Another fake-out.

There have been a few series now about the everyday life of fujoshi. While entertaining, I always wonder why they are so hesitant to include an actual BL subplot. Isn’t the target audience for these shows the same audience that watches BL in the first place? There does seem to be a disconnect, with gayness self-contained within the BL genre and without existing independently in the world in any real capacity. Naturally, there’s a bit of an issue of political correctness with a BL fangirl meeting an actual gay dude, but no studio seems to want to try tackling it, either. Even without going that route, I wonder why we can’t even get a measly same-sex kiss in a series like this, even in a fantasy sequence. For a series full of erotic jokes, what’s the hold up?

That being said, the series isn’t really about BL at its core, it’s about finding people who you can be yourself with. Since the purported drama of the show – Narumi concealing her inner otaku – is resolved so quickly, the series is simply a string of day-to-day problems, which are subsequently resolved without any particular furthering of a greater plot. Wotaku doesn’t have much need for a greater plot, either. It is silly, heartwarming, reflective, and not above a good poop joke. Narumi, who has few qualities beyond her nerdiness, is absolved of pretending otherwise. The series is a manifesto in being yourself, and finding people who appreciate you for your passions and not in spite of them.

Animation: Perfectly fine. It doesn’t excel, but also has no reason to do so. The designs are aesthetically pleasant enough, and the lead characters distinct without being too silly, in that tenuous space between colorful and realistic.

Music: The opening sequences is bubbly and cutely animated. The music is nothing to write home about, but isn’t grating, either.

Characters: At its heart, the series is a comedy, and each of the leads – all mid-career adults who never managed to grow out of anime – has an angle. Narumi is larger-than-life, and her fangirl voice – roaring when she’s angry, nasal and singsongy when she’s being cute, and with a penchant for occasionally talking like a samurai – might be irritating if it wasn’t so funny. But Narumi doesn’t wave her protagonist card around too much; this is an ensemble show. Hirotaka, though visually blank-faced and boring, snatches his comedic spotlight by being a childish weirdo who pulls such pranks as sometimes forgetting to feed himself during a multi-day gaming marathon. Sophisticated Hanako is sensual and sharp-tongued without being the show’s designated sex symbol. Kabakura, ostensibly the most normal of the lot, gets to play the straight man to the antics of the other three, only to have his own nerdiness shine at a punchline for why he puts up with all of this. Side character and otouto-chan Naoya is an enthusiastic outsider to nerd culture who provides some muggle contrast to the group of friends whose mutual social lives have normalized nerd culture between them.

Despite the premise, this isn’t a show about how geeky men, too, can find hot manic pixie dreamgirls to date. Hirotaka and Kabakura are as attractive and certainly as equally (mal-)adjusted as their female counterparts, and the BL ribbing serves to objectify them equally to the girls. Not that there’s much objectifying to go around, when everyone is conservatively dressed the entire time. After all, at the end of the day, this is a show about friendship, and an argument for it being a waste of time to hide the things you love from the people you spend time with. Not that, of course, Narumi ever really has to make that choice when a social network of otaku conveniently falls into her lap. Wotaku never gets deep, but it doesn’t need to be to get its underlying message across: it’s okay if your hobbies haven’t changed since you were 12. 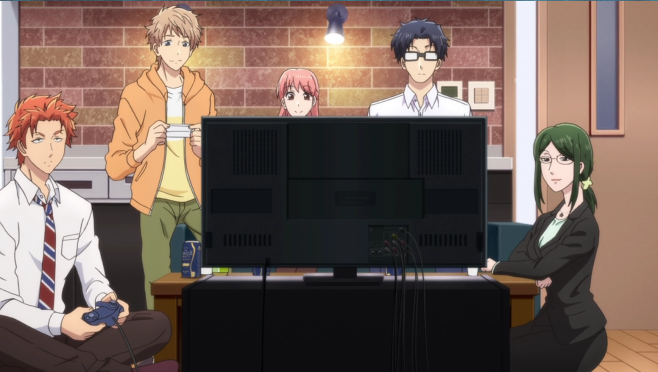